KEØGZT here with a tip for a good upcoming Nat Geo film… and a good Ham-related e-newsletter/blog.

The current issue of the e-newsletter Calling CQ is below.

–from Calling CQ:
‘…The National Geographic channel announced the release of the short film Before Mars the story of twin Korean American teenage girls who move to a new town with their military mom. Hana finds a ham radio and with the help of an Elmer, successfully makes contact with an astronaut on the International Space Station. In the story, that feat helps inspire the sisters to pursue careers in space exploration—one as an astronaut on the Mars mission, the other as an official at Mission Control.’

The Nat Geo film looks to be a great one. Check out the trailer in the above link.

The author of Calling CQ, is Jeff Davis and I’ve been following his blog (different from the e-newsletter) for about a month, plus lots of his previous posts. His blog can be found at

See you at the RARC mtg. next week.

Thanks Mike for this information. I will be watching this short film. 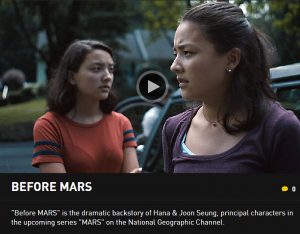